The inspiration for this series began when I found out that my favorite gallery, the Century, planned to mount a show of paintings themed “The City.” I love exhibiting there, but had nothing remotely in the category, so of course decided to do an appropriate painting immediately. As I walked home, I mulled over what I might want to contribute. Surely there would be lots of skyscrapers, suns setting over the Hudson, etc. What was the city? Really, really the city? As I walked along, I found myself under a large scaffolding with lots of signs everywhere as storekeepers strove to make their presence known in spite of the obstacle. AHA! This is the real city, I thought. I whipped out the iPhone and took a shot of what was there in front of me, then discovered that painting from that little spontaneous shot was actually fun. That scaffold obscured a view of the Chrysler Building, as it happened, thus the painting’s title. Everything worked out nicely. Here’s “Elusive Skyline”:

In this case, as in other pieces in this series, the subject matter was arrived at “on the fly.” But here, it was right in front of me all the time. I live in a one-bedroom apartment. I finally realized that I was spending my life in the bedroom, which features the bed, TV, computer, and desk, while only utilizing the “other” room about three times a year when entertaining. I then realized that I was going to the Art Students League and other groups, not so much for the instruction, as simply for a place to paint. Easily enough, I got rid of rugs, blinds and furniture in order to have a proper work space. In fact, I live on a high floor with north light, and with windows that are nearly floor-to-ceiling. I couldn’t be more privileged. So, here is “The Studio,” (formerly “the living room”).

Playing with the Sleepwalker

And what about the country living room, featuring “Fred’s Folly,” his 9 x 12 foot plywood valance that dominates the room? 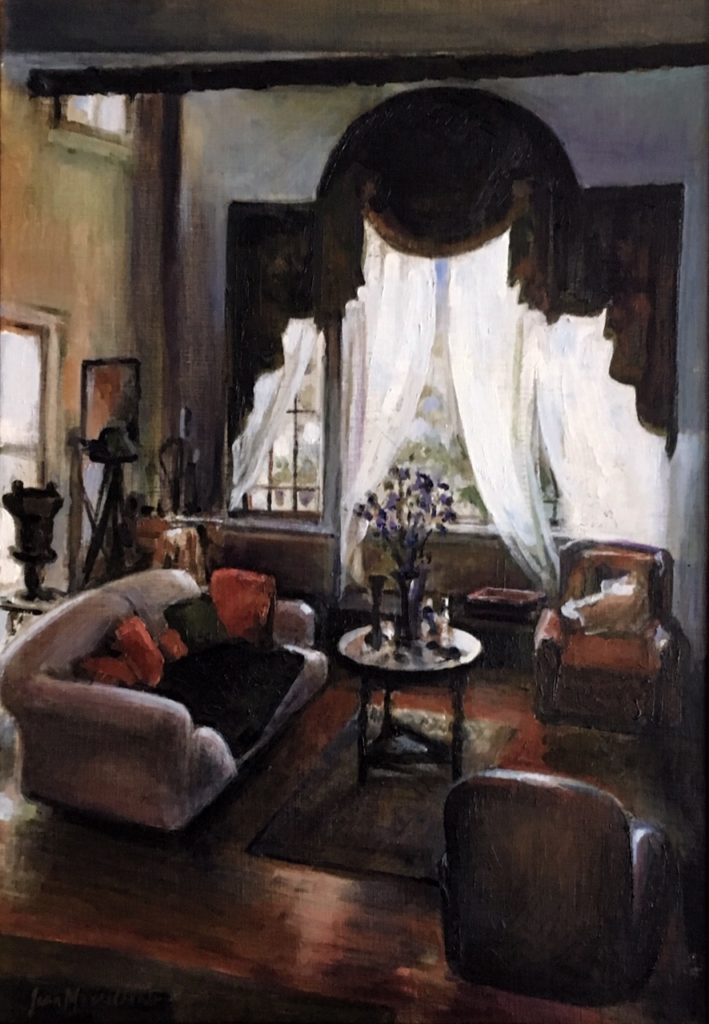 Once again, it was right there under my nose the whole time. I’m blessed to have incredible north light in my studio, on a high floor, overlooking a wonderful garden with buildings in the distance.

How bizarre it’s been to see a scene like this during the pandemic! A long line of masked customers, standing six feet apart, each waiting for their turn to enter Trader Joe’s!

Shopping in the Time of Covid

It was the last day of school before summer vacation, a time of great celebration for so many, certainly for kids at my grandchildren’s LREI. This painting was sold at auction, from the Lavan541 Gallery in Chelsea.

Still during the pandemic, this time a leisurely stroll along the East River, approaching the UN, one late afternoon.