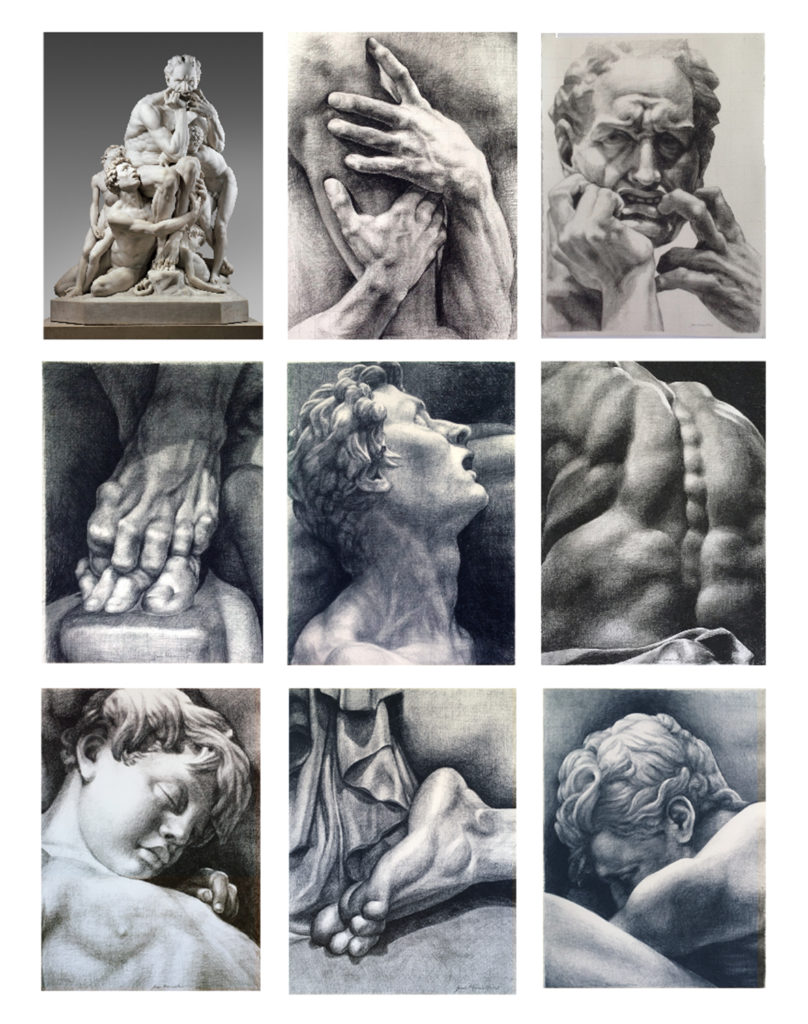 Jean-Baptiste Carpeaux’s “Ugolino and His Sons” dominates the Petrie Court at the Met, and continues to inspire awe. I’ve greatly enjoyed creating large drawings of various details of this magnificent sculpture.

The above photo gives you a sense of scale.

The legend of Ugolino della Gherardesca is mesmerizing and terrifying. He was an actual historical figure, a Pisan nobleman from the 13th century, who was imprisoned for treason in a cell along with his sons and grandsons. His jailers threw the key into the Arno River. Dante and other poets speculated on what might have transpired in that cell as Ugolino and his offspring slowly died of hunger. A legend developed about these events in which his sons, upon watching the deterioration of their beloved father’s health as he slowly starved to death, grasped his legs and begged to be cannibalized.

As presented by Carpeaux, it’s evident that Ugolino was agonized from head to toe.

Ugolino’s devoted son, the one whose hands are shown grasping his father’s leg while begging to be consumed, is shown here in profile.

Even Ugolino’s back is fascinating.

Every inch of this amazing piece of sculpture is worthy of examination. Here is one foot of
“The Devoted Son.”

And, finally, the deeply emotional gesture of “The Despondent Son.”

I’m honored to have all of the eight drawings from the Ugolino Series on display at the historic 13th Street Repertory Theatre indefinitely.

Carpeaux’s genius was staggering. He was born in 1827 to a working class Valenciennes family, the son of a stonemason. When he was eleven years old, they moved to Paris where he was apprenticed to a plasterer. Since drawing was considered to be useful in this profession, he was then enrolled in what was essentially a trade school where the discipline was taught for its utilitarian benefits. Fortunately, his talent became too evident to ignore, affording him the opportunity to enroll in the École des Beaux-Arts. He was accepted into the French Academy in Rome, where he spent five years studying, greatly influenced by the work of Michelangelo. “Ugolino and His Sons” was the result of a fifth year assignment, initially in plaster, but later rendered in marble, the very one that graces the Petrie Court at the Met.

The creation of this series has been extremely gratifying to me. Each piece took about a month to complete. Two of these drawings have been hung at the Century Association, but my fondest hope would be to see all of them on display somewhere together on one wall.